In 1518 a City Council decreed “neither O' nor Mac shall strut and swagger through the streets of Galway”. The names of the native Irish male population all began with O’ or Mac meaning “grandson of” or “son of” followed by the personal name of the ancestor. In the late 16th century the Irish nation under duress began the process of changing their surnames to be more English sounding.

The English Poet Edmund Spencer who spent 20 years in Ireland called upon the English to commit genocide against the Irish as Earl Arthur Grey had done in 1582 using brutal scorched earth tactics resulting in a serious famine which killed as many as 30,000 people in just six months. 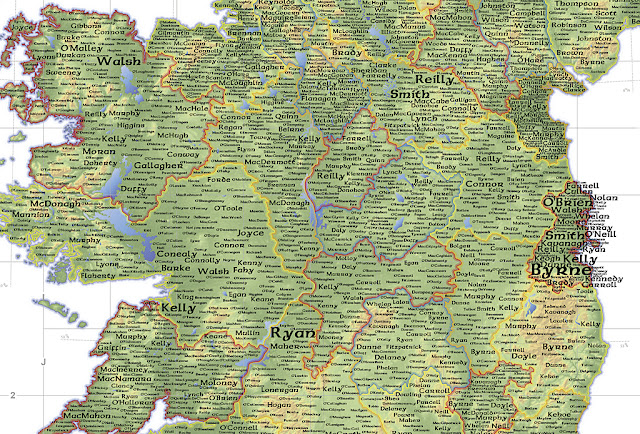 The Elizabethan conquest of Ireland resulted in the establishment of a central government in Ireland for the first time, the outlawing of the native Brehon laws and imposition of English law, the ethnic cleansing of the native population, the despising of Irish manner hairstyles, clothing and all things Gaelic. Therefore it is not surprising that it became unfashionable to have an Irish name.

While the surname change process was initiated by oppression it was not simply due to it alone but was driven by a complex interplay of many different circumstances. For example one could gain significant social advantages by appearing to be English or to appear to be in support of the English. Families might even be able to avoid land confiscations. However written records do not allow us to count the many families went by their original name but used an official name for paper records and interactions with government. (perhaps this is the primary reason for the survival of Irish surnames). A similar practice continues to this day most notably in the forename Liam, almost no holder of this name is called Liam on their birth certificate. They are all called William.

English officials unfamiliar with the Irish language recorded surnames as the heard them and thus wrote the names down a phonetically. For example Mag Oireachtaig (Ma-gur-ach-ti) becomes Ma’Geraghty or Mac Geraghty. Another scribe might hear it different like Mc Garrity or recorded it carelessly. Thus one surname takes on the appearance of many and we get all these variations Gerrity, Gerty, Gerighty, Gerighaty, Gerety, Gerahty, Garraty, Geraty, Jerety, McGerity, MacGeraghty, MacGartie, MacGarty and many more.

Misspellings were also common because the uniformity of spelling we enjoy today was not present in the English language until very recently. An interesting example is William Shakespeare (1564-1616) who spelled his name in a variety of ways. Despite his great learning and literary accomplishments 83 variants of his name have been attested in English source material

Pure substitution occurs where the connection between the original surname and the substitute is remote for example, Clifford for Ó Clúmháin, Fenton for Ó Fiannachta, Loftus for Ó Lachtnáin, Neville for Ó Niadh, Newcombe for Ó Niadhóg.

Ó Bláthmhaic is anglicised as Blawick or Blowick and becomes Blake

Image taken from “Mapping the Emerald Isle: a geo-genealogy of Irish surnames”. Tip: type in a name of interest or zoom to a place to see the names associated with that place in 1890.
http://storymaps.esri.com/stories/ireland/
Posted by Histor at 2:33 PM