Guinness - The God of Love 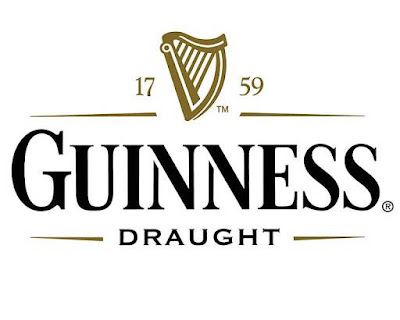 The name "Guinness" is derived from "Mag Aongus" meaning the son of Aongus who in mythology was a member of the Tuatha Dé Danann and probably a god of love, youth and poetic inspiration. Aon = one and gus = choice thus literally meaning one choice but more accurately translated as 'chosen one'. In Irish orthography "Mac" meaning "son of" changes to "Mag" when the following name begins with a vowel. When the name is vocalised in speech it sounds like Ma'gaon-gus or ma'gan-gus which in turn is phonetically rendered to English as MacGuinness. During the 17th century under pressure from the English authorities, many Irish families dropped the prefix "Mac" to make their name sound more "English".

In 1518 a town statute declared "Neither O nor Mac shall strut nor swagger through the streets of Galway."

Consequent to such pressures, the use of Mac and O’ was dropped by many families. Although some families have since revived the O or Mac, while others never did. This explains variations in surnames like Mahony and O’Mahony, Neill and O’Neill but each variant has a common history. Many old Gaelic names became Anglicised. Sometimes the Anglicised version was a translation, sometimes a phonetic spelling of the Irish, sometimes a mixture of the two.

The proprietor of the Guinness brewery Benjamin Lee Guinness chose the harp motif in 1862 and registered it as a trademark shortly after the passing of the Trade Marks Registration Act of 1875. Could Benjamin's choice of the logo have come from the Aongus stories who possessed a harp that made irresistible music and his kisses turned into birds that carried messages of love?

Certainly, Guinness (the product) is irresistible to some and without it (I surmise) many would not have been able to find love!

In Days of Old they Went Out on the Piss. Literally! 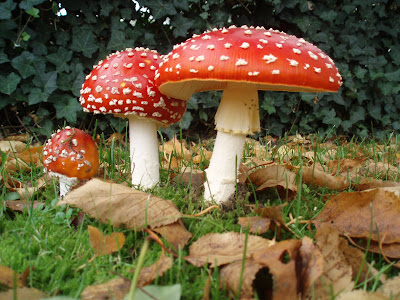 Pardon the colloquial expression but were ya on the piss! These days we don’t take that phrase literally unless of course you happen to be asking Bear Grylls, but there was a time when people did actually drink urine in order to get…am… well …pissed! Consuming hallucinogenic mushrooms is a dangerous pastime but the risks could be reduced by first allowing the mushrooms to pass through a digestive system. Accordingly, people in Siberia many moons ago would first feed the mushrooms to reindeers and then drink the animals’ urine.

You will recognise the mushrooms from depictions in children’s fairy tales. These particular mushrooms are called Amanita Muscaria, commonly known as the fly agaric or fly amanita as it was once used as a household fly killer.

The mushrooms could be eaten without first putting them through a digestive system but carried a higher risk of suffering nausea as the mushrooms are difficult to digest. Amanita Muscaria are also expensive and as you will see later the poor drank the golden nectar of richer people.

The mushrooms are prepared by boiling, by which the water acquires an intoxicating quality, and as a sort of drink whitish the Tartars prize beyond all Other. When the nobility and ladies are assembled, and the ceremonies usual between people of distinction over, the mushroom broth goes freely round; they laugh, talk double entendre, grow fuddled, and become excellent company.  The poorer sort, who love mushroom broth to distraction as well as the rich, but cannot afford it at the first hand, post themselves on these occasions round the huts of the rich, and watch the opportunity of the ladies and gentlemen as they come down to pass their liquor, and holding a wooden bowl, catch the delicious fluid, very little altered by filtration,  being still strongly tinctured with the Intoxicating quality. Of this they drink with the utmost satisfaction, and thus they get as drunk and as jovial as their betters.

Filip Johann von Strahlenberg, a Swedish prisoner of war in the early eighteenth century, reported seeing Koryak tribespeople waiting outside huts where mushroom sessions were taking place, waiting for people to come out and urinate. When they did, the warm, steaming tawny-gold nectar was collected in wooden bowls and greedily gulped down. The Amanita muscaria effect could apparently be recycled up to five times in this manner, and remarkably, was less likely to cause the vomiting often associated with the direct ingestion of the mushroom itself.

Because of its red and white appearance, the association with reindeer an urban myth has grown up that this has links to the legend of Santa Clause. However, Scott Hajicek-Dobberstein, researching possible links between religious myths and the red mushroom, notes, "If Santa Claus had but one eye [like Odin], or if magic urine had been a part of his legend, his connection to the Amanita muscaria would be much easier to believe."

Now I predict that when someone asks you ‘are ya going on the piss’, you will forever more think of this story!

Happy Bealtaine/Beltane (be-all-tin-ah) or May Festival. The astronomical event upon which Bealtaine is based falls on May 5th 2020 (4th of May in the Pacific, Alaskan and Hawaiian time zones). The name Bealtaine derives from Irish meaning ‘Bright Fire’ and alludes to the pre-Celtic and Celtic traditions which involve the lighting of fires at Sunset. On May 5th the dark half of the year ends and the bright half begins. The biggest Celtic festivals in Ireland fall on Cross Quarter days which mark the astronomical halfway point between the equinoxes and the solstices. Traditionally Bealtaine begins on the 1st of May and the mismatch with the actual astronomical date is due to the changes brought about by the Gregorian calendar reforms.

Horsemen on the Hill of Uisneach

Cross quarter days mark the biggest celebrations in ancient Ireland because they mark the beginning of the seasons, unlike the solstices which occur in the middle of their respective seasons. Imbolc was the last festival falling on February 3rd, a vital date for ancient farming communities because it marks the time when seed planting begins.

In ancient Ireland, great bonfires marked a time of purification and transition, heralding in the season in the hope of a good harvest later in the year and were accompanied with ritual acts to protect the people from any harm by Otherworldly spirits, such as the Aos Sí. Like the festival of Samhain (31 October) which lies directly opposite Bealtaine on the calendar, it was believed by the ancients to be a time when the veil separating the world of the living from the Otherworld became particularly thin, thus allowing spirits to cross over.

The new day started at sunset for the ancient Athenians, Jews and Celts. In other ancient societies such as the Babylonians, the day lasted from sunrise to sunrise which was the case in early Roman society too but later the Romans decided that the day should start at midnight (the diametric opposite of noon) and it has remained with us ever since. Surprisingly it makes it almost impossible for some people to understand the dating of Celtic festivals! The first of November, for example, began at sundown on the 31st of October. Similarly, its diametric opposite on the calendar the first of May began on sundown on the 30th April. The months of November and May are still called in the Irish language Samhain and Bealtaine which are derived from the names of the two great Celtic fire festivals. Thus sundown today 30th April marks the beginning of ‘Oiche Bealtaine’ or May Eve from when the Roman system was adopted. 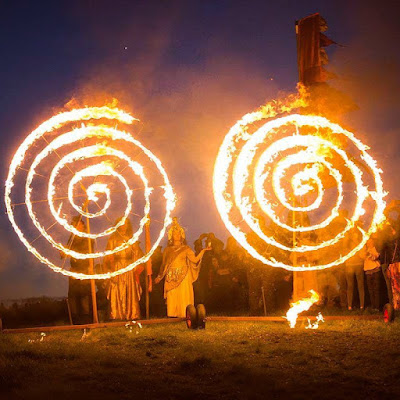 The Hill of Uisneach or Ushnagh (Irish: Uisneach or Cnoc Uisnigh) is an ancient ceremonial site in the Barony of Rathconrath in County Westmeath, which in mythology, is regarded as the centre of Ireland and is closely associated with the festival of Bealtaine. Ail na Míreann (stone of divisions) stands on the hill and was the very point deemed the mystical navel of Ireland. It also stood at meeting point five original provinces of Leinster, Munster, Connacht, Ulster and Meath. Tradition tells that Bealtaine fires were lit and Druidical ceremonies held on the hill. In the Lebor Gabála Érenn (Book of the Takings of Ireland), the Nemedian Druid Mide lit the first Bealtaine fire there. This fire it was said could be seen from the Hill of Tara and when those at Tara saw it, they lit their fire.

According to a popular passage from the same record, Ériu, a tutelary goddess sometimes seen as the personification of Ireland, meets the invading Milesians at Uisneach where, after some conversation and drama, the Milesian poet Amergin promises to give the country her name. Geoffrey of Monmouth's Historia Regum Britanniae ("History of the Kings of Britain") claims a common belief that the stones of Stonehenge were brought to Britain from Uisneach.

The Beltany Stone Circle is located just south of Raphoe in Co. Donegal, its name derives from Bealtaine. At sunrise at Bealtaine, the only decorated stone in the circle is aligned with the rising sun The stone circle dates from around 1400-800 BC and comprises 64 stones around a low earth platform or tumulus, situated at the summit of Tops Hill. One stone is decorated with cup marks and many of the stones stand at an angle after being disturbed around a hundred years ago. According to the National Monument Information plaque at the site, there may have been about 80 standing stones originally.

In Celtic mythology, "Aed" refers to "fire" and is an early fire deity associated with the Assaroe Falls near Ballyshannon, Ireland. Two better-known characters, Lugh and Balor are solar gods. Within the dark of the sidhe mounds lay the brilliantly lit palaces of the fairy folk. The gentry themselves are often described as radiant beings. This underworld of brilliance was later demonized as Christian "hellfire." Even today, individuals who encounter Otherworldly or deceased spirits describe them as luminous figures.

Advanced astronomical knowledge is the basis of the fire festivals of the Celtic year. Societies throughout the ancient world were transfixed by the power of fire. Both consuming and rapturous, the flame became the living, formless symbol of the Goddess (or God). Flame and smoke were used for ritual purification and carried prayers upward to the diverse, non-human agents that populated the ancient world. While on earth the ash promoted the fertility of both landscape and household.

The President of Ireland, Michael D. Higgins lights the first of the fire festival on the Hill of Uisneach.

Video of the 2015 fire festival.
https://www.youtube.com/watch?v=X3cZS1_PQPY

Posted by Histor at 2:25 PM No comments: